History has shown us a pattern of our dependence on the greener world around us. In my opinion, none have been more influential than our relationship with herbs for our medicinal and culinary purposes. Our earliest accounts of herbal usage dates back longer than what we originally thought. Where most might think that it had originated with Hippocrates (where in medicine comes the term Hippocratic oath), we have fossil evidence that shows it even started before the Sumerians. Fossil records place herbal remedies with the Paleolithic era, roughly some 60,000 years ago! This is particularly evident in France in the Lascaux Cave paintings*. 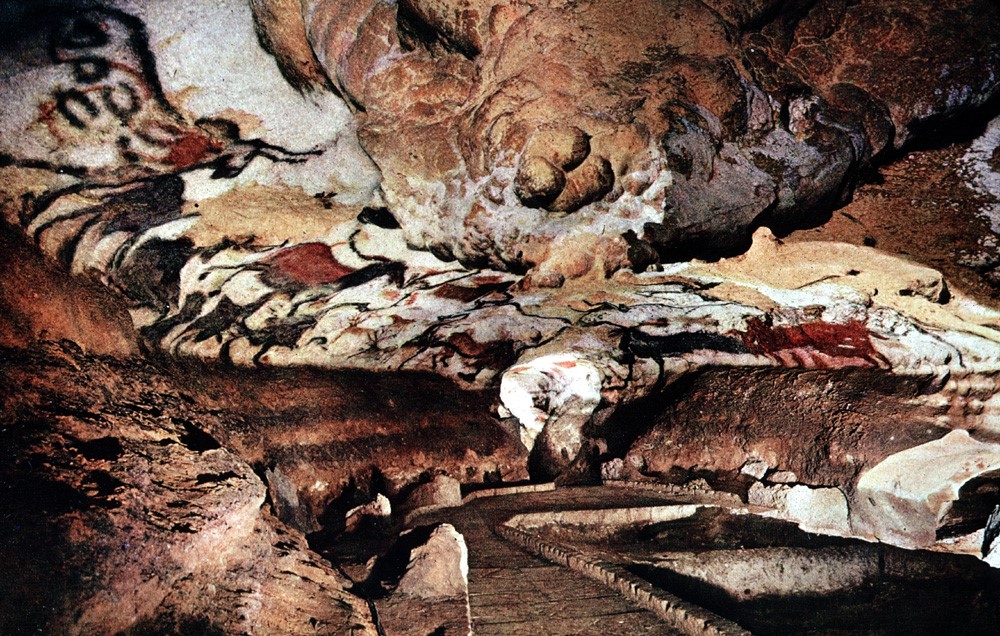 Carbon dating has placed their herbal drawings of Gingko Biloba back to around 13,000-25,000 BC! In addition to our practices, primates have been using herbs to quell upset stomachs since their very existence, which is most likely who we had learned it from.

Depending on the research site and text, there are many different starting points for herbal usage. Whether it is the Sumerians (5,000 years ago on clay tablets), Egyptians (Ebers Papyrus 1550 BCE), In India (Ayurveda Medicine Sanskrit writings of Rig Veda and Atharva Veda 4,000 BC), or Chinese (Shennong Benacaojing 2000 BC); none really took a foothold until the Roman and Greek studies into this amazing world of floral interactions. This was partially due to the Christian religion gaining a foothold and influencing the people around them and thus continuing even until today.

Before the Christian religion introduced itself to the Romans, three Grecian men stand out due to their herculean contributions. First and foremost, Hippocrates. This particular gentleman wrote the Hippocratic Corpus which served as a collection of texts. It is disputed if he wrote everything, but what is evident is that he most certainly compiled the information into the first ever encyclopedia of medicines for their time. Which it is my belief that this is the first medical encyclopedia and may influenced Pliny the elder’s Natural History, also referred to as the earliest medical encyclopedias. Second memorable man to mention would be Diocles of Carystus, known as “the second Hippocrates.” Although his texts and encyclopedia no longer exist, he is quoted numerous times by our third candidate; Galen. Galen, was a physician who practiced in Rome as their army’s doctor. What I commend Galen for was is nature to write down everything that pertained to his knowledge, most notably his Works of Therapeutics. He took herbal remedies and combined it with his medicinal knowledge into one treatment. As rudimentary as it was, it still was far beyond it’s time. The only downside is that unfortunately it only treated the symptoms of disease and not the actual problem. All three men paved the way for the middle ages and the church’s influence in herbs.

The middle ages gave rise to fear; fear of the afterlife, fear of the outside world and fear of one’s neighbor. Monasteries were built in place and fortified allowing only monks to work and live within. Much of their work is up for speculation, however many newer scholars can agree about their dedication to herbal plants. Known from their blueprint drawings these monasteries contained robust “physick” gardens (where the term physician originates from). These physick gardens were centers of observation and growth in the herbal world. These monasteries soon grew to be an equivalent of what our CDC (Centers for Disease Control) and WHO (World Health Organization) are today. They took the classical teachings and writings of their predecessors and translated them for everyday use and education. These monks spent their lives dedicated to the development, understanding and safeguarding of herbal remedies for medicine and everyday life. 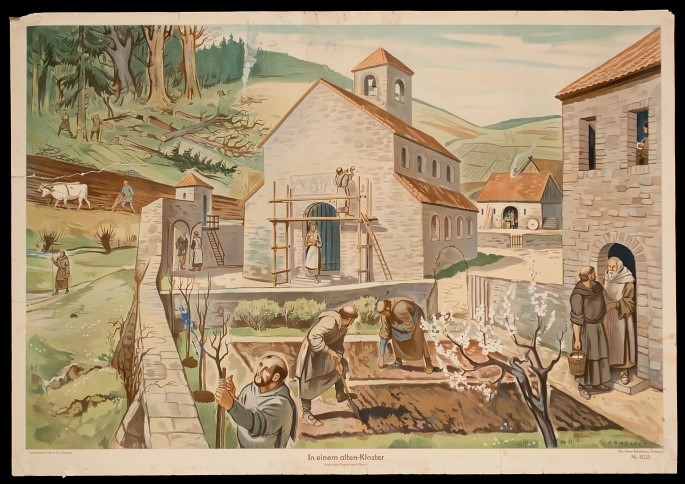 It should be noted as well that for as advanced as they were in their scientific method of the time they still relied heavily on folk lore. We see satirical references even in modern culture as in the popular film, Harry Potter. The Mandrake plant was for a time actually thought to cause death unless picked by a dog on a night with a full moon. If not plucked in this manner the plant would send out a painful shriek that would kill the cultivator.

Even with its “roots” in folk lore, if it weren’t for the hard work of the monks we may not have the wonderful mind of Gregor Mendel who paved the way for modern day botany. As time continued and science progressed into the 1900’s, we were able to extrapolate the chemical properties of herbs to be used in our modern medicine. Pharmaceutical companies in America have had an increasing decline in usage of herbs for more chemical isolated properties. However, around 40% of modern medicines today still come from herbal ingredients, and world-wide it is estimated that roughly 70% of medical practices still encourage usage of herbal remedies. *

As most herbs have been used for medicinal purposes, I want to take a moment to annotate how we have used them for other means. What first attracted us to herbaceous flora was their key-tones, or scents. If it smelled pleasant or pungent we found a use for them. A clear majority were used to cover up unpleasant smells, most notability one’s own. As bathing was unregularly scheduled, herbs were used as a common deodorant and extensively used during the middle ages. Garden benches were covered with pleasant smelling herbaceous plants for individuals to become more intimate. 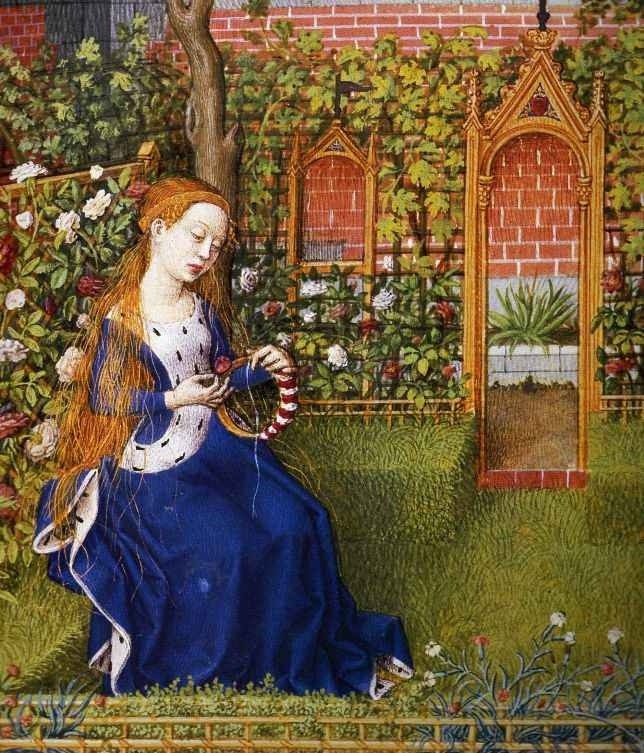 It was used by peasants on their dirt floors. “Thresh” as it was commonly called gave us the common term “thresh-hold” as a wooden board was placed at the doorways to keep thresh inside the house. Most recognized usage was during the black plague; roses, carnations, mint and others were inserted into the bird beak like mask of the physicians to cover up the smell of corpses that lined the streets. 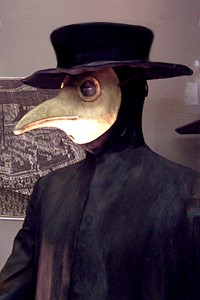 It was thought that the foul odors were the cause of the disease, which has since been disproved and attributed to fleas on the backs of rats. These key-tones were introduced into culinary practices to also cover up the foul stench of carrion, and to preserve meats to last longer. To this day, we still cook with rosemary, lavender, pepper and mint to name a few. Herbs even inspired early trade as explorers like Marco Polo took to the Orient to discover new spices for preserving foods and use as perfumes.

Our human race has relied heavily on aromatic and non-aromatic herbs. Practices once taken from primates, humans have developed and expanded usage and have incorporated them into our everyday lives to the point where it goes unnoticed. Amazingly as they bring us together, they also encourage us to travel thousands of miles. So, the next time you take your Gingko Biloba for memory, or pull out rosemary to garnish your dinner, remember the journey through time that herb has taken; it might make your next dish all the more relishing.

PrevPreviousThe Hand of Man
NextSave Yourself From These Simple Gardening MistakesNext

Speak with a professional today
Menu